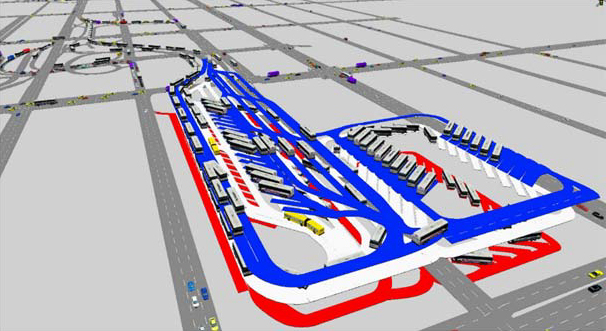 The objective of this project was to develop a model of existing conditions of the Port Authority Bus Terminal (PABT) using VISSIM. The model being developed would show not only traffic on the city streets but also shows bus operations in/out of the PABT building including the internal circulation. This model will be used to evaluate the impacts of new designs not only on the PABT but also on the city streets surrounding the PABT and the Lincoln Tunnel (LT) operations.

In 2006, KLD built the original LT NY model and KLD updated it in 2012. This simulation model shows all traffic flows on the city streets (between 8th Avenue and 12th Avenue, from 27 Street to 45 Street) and the PABT ramps. As part of this effort, the three floors in the PABT for bus operations – lower, third, and fourth were being added to the model.

The approach to build the combined model started with the creation of three separate floor models initially and then integrating these into the 2012 LT NY model. These are detailed microscopic models that represent bus operations starting from the tunnel, through the ramps, and inside the terminal including the dwell time at the gates.

VISSIM’s VAP (the application programming interface) is be used to represent dynamic behavior such as NJT coordinators’ actions and dynamic routings inside the building.

Project deliverables will include the updated LT NY model with the PABT internal network incorporated, a final report, the summary of data used for simulation, and a project report. Stantec is the prime consultant.