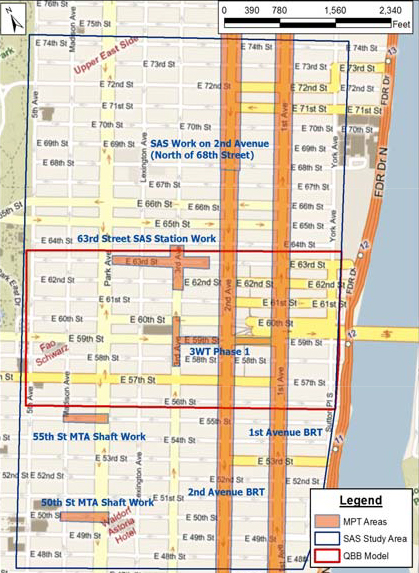 The Maintenance and Protection of Traffic (MPT) plans related to the 63rd Street Station had been developed and needed to be analyzed in conjunction with other ongoing projects in the area. These included the construction related to the Third Water Tunnel (TWT) and 1st Avenue/2nd Avenue BRT (Bus Rapid Transit) projects.

The ‘SAS model’ was developed covering 48th Street to 72nd Street, and York Avenue/Sutton Place to Fifth Avenue including the connecting ramps to and from the FDR. This model was used to assess impacts during weekday AM, weekday PM and weekend peak period conditions, concentrating on the peak hour. Supplemental data collection was done, and the data incorporated into the calibrated model. Existing information on the bus routes and schedules, signal timing, network geometrics, and origin‐destination patterns were incorporated into the model. Recommendations were provided for the MPT plans based on the findings of the analysis. The tools used in the analyses included Aimsun, Synchro/SimTraffic and HCS.